We update studies as the Lord Jesus leads us. You can find the latest update of this study at ChurchAges.net

Leaven represents sin and unbelief. Anything that puffs us up

I CORINTHIANS 5:6   Your glorying is not good. Know ye not that a little leaven leaveneth the whole lump?

It corrupts and produces carbon dioxide. The nature of any gas is to diffuse through all the bread dough, which swells up as the gas moves between the bread particles, pushing them apart. Gas will always fill its container. Thus the whole loaf of bread is puffed up by the gas. You cannot confine the gas to a small part of the dough; it just keeps spreading to push all the bread particles away from each other as the bread rises.

That is how Bible error works.

A single error will grow and spread.

The bishops accepted the unscriptural word “Trinity” at the Council of Nicaea in AD 325. It seemed fairly harmless.

One extra word was added to the Bible.

Could this do much harm?

But to explain Trinity, look at all the unscriptural statements that had to be added in.

“One God in three Persons”

“First Person of the Godhead”

“Second Person of the Godhead”

“Third Person of the Godhead”

“Father and Son and Holy Spirit are co-equal.”

The Trinity God has no name

God’s name disappears when you have a Trinity.

The name of the Father is Jehovah.

The name of the Son is Jesus.

The Holy Spirit has no name in Scripture. Strange. Three People but only two names.

The Holy Spirit is God but has no name! A nameless God.

Then it gets more problematic. Try finding one name for all three Persons.

Then we get smoke and mirrors. Trinitarians repeat the mantra “Get baptized in the name of the Father, and of the Son, and of the Holy Ghost” and then fool themselves into saying that that sentence is the name of God, although they have actually mentioned no name.

How dumb can we get? Intelligent people being convinced that three titles somehow become a name.

The elephant in the room.

The obvious fact that nobody dares to mention.

Thanks to Trinity, the Christian God has got no name.

Heathens catch out the Christians this way.

Question:  "How does God die?"   Christians plead the 5th Amendment and refuse to answer.

When Peter in Acts 2:38 actually uses the name of Jesus Christ in water baptism, the Trinitarians tell us that he made a mistake because what he says does not agree with Trinity.

So now we have to reject the Scriptural baptisms of Peter, Paul, and Philip because they baptized in the name of Jesus. Notice the spread of leaven.

Trinity makes us ignore the three Scriptures on baptism.

ACTS 2:38   Then Peter said unto them, Repent, and be baptized every one of you in the name of Jesus Christ for the remission of sins, and ye shall receive the gift of the Holy Ghost.

ACTS 8:16    (For as yet he was fallen upon none of them: only they were baptized in the name of the Lord Jesus.)

ACTS 19:5   When they heard this, they were baptized in the name of the Lord Jesus.

"Lord" and "Christ" are titles. The name is Jesus.

We now have to reject how the apostles baptized if we are to keep in with modern church leaders who have produced 45000 different kinds of denominations and churches. Such is the huge number of disputes and differences that they have with each other.

Then Trinity tells us that “Jesus is in the Godhead.” Totally unscriptural.

But what is worse, this contradicts the Bible that specifically states that the whole of the Godhead is in Jesus.

COLOSSIANS 2:9 For in him (Christ) dwelleth all the fulness of the Godhead bodily.

Can you see what one mistake led to?

Trinity made us add all sorts of unscriptural explanations.

It then contradicted certain Scriptures or declared that these Scriptures were a mistake.

Then it robbed God of His name.

We must not swear in the name of God. That is blasphemy. Taking God's name in vain.

No sinner hits his thumb with a hammer and swears in the name of Father, Son, and Holy Ghost.

But daily, Sinners blaspheme in the name of Jesus Christ.

So the sinners know the name of God, but the church-goers do not. Such is the tragedy of the unscriptural word “Trinity.”

This one word, "Trinity," grew to separate us from the written Bible in many ways. That is how a little leaven spreads until all the churches believe it and furiously defend this unscriptural word.

Worse still, they condemn those who do not believe in Trinity. They condemn the baptisms of the apostles in the Book of Acts.

Yet Paul warned us not to dare disagree with him.

GALATIANS 1:8 But though we, or an angel from heaven, preach any other gospel unto you than that which we have preached unto you, let him be accursed.

ACTS 19:4 Then said Paul, John verily baptized with the baptism of repentance, saying unto the people, that they should believe on him which should come after him, that is, on Christ Jesus.

ACTS 19:5 When they heard this, they were baptized in the name of the Lord Jesus.

God was above the Jews as the Father. 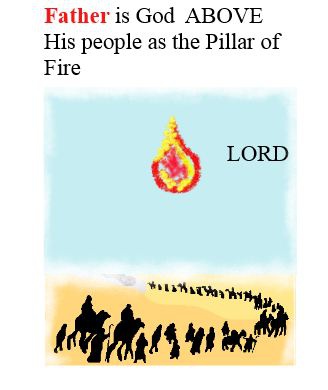 God was with the Jews as the Son, Emmanuel. 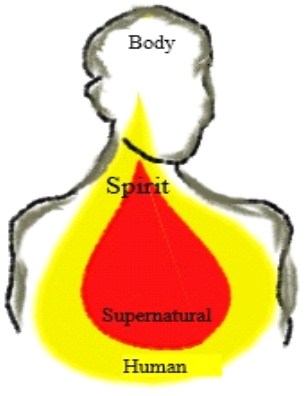 God is in the church as the Holy Ghost. 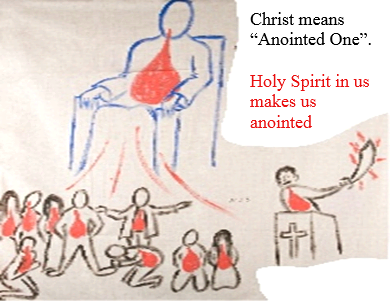 Father, Son, and Holy Ghost simply mean God above, God with, and God in His people.

Another problem with Trinity.

There is no “God the Father” in the Old Testament.

But, as the Father, God took on the name Jehovah (or JHVH or YHWH depending on who you speak to). But there is no mention of the name Jesus in the Old Testament.

In the New Testament, things are reversed. The name Jesus is mentioned, but the name Jehovah is never mentioned.

God was the Jehovah of the Old Testament Who became the Jesus of the New Testament.

The Jews could not recognize that fact, and they got destroyed as a nation in AD 70 when the Romans destroyed the Temple and Jerusalem. Sadly, church-goers also cannot recognize that the Jehovah of the Old Testament took on the human name of Jesus in the New Testament. So, what lies ahead is the destruction of the Protestant churches by the Roman Catholics in the 3.5 years of great Tribulation.

The Trinity is a collection of ideas. But it is not the answer to the Godhead.

The Trinity introduces more issues and more serious issues than the issues it was intended to solve.

If "Trinity" is the truth, then there is no need to be Scriptural

Thus they claim that other unscriptural words must also be the truth.

Thereby they fool us into “Christmas” also.

The error keeps spreading, just like leaven swells.
“Trinity” becomes their foundational argument for introducing other unscriptural words that we must believe.

2020 was called "perfect vision" by opticians.

The year 2020 showed us clearly what God thought of our churches.

He closed them all down with the COVID-19 coronavirus pandemic.

God has spoken, but we are not listening.

God is obviously not impressed with the common beliefs of the churches, like Trinity and Christmas, our churches’ biggest celebration.

We were never asked to celebrate the birth of the Lord.

So why do we do it? Because Pope Julius I said so around the year AD 350.

He was copying the pagan Roman emperor Aurelian who in AD 274 declared that 25 December was the birthday of the sun god, Sol Invictus.

So we have absorbed this pagan celebration and allowed it to resurrect in our Christian churches as the most important financial celebration of the year.

Lenin, the founder of Communism, said that Christmas is the continuation of Capitalism by religious means in order to get rid of all the unsold stock at the end of the year.

And we think that buying Christmas presents is compulsory for the Christian faith. Thereby we instill materialism into our children's minds.

Santa Claus has a red jacket because red is the colour of Coke tins, and Santa's red jacket was invented by an advertising artist for Coke in the 1920s and 1930s.

In other words, Big Business is guiding church worship. We must buy presents or else, in December. Then we sweat it out as we are semi-broke in January, which is now spelled Janu-worry.

Often we feel obliged to buy things we do not need to impress people we do not like with money that we do not have.

Leaven spreads, and the church adds in the unscriptural “Good Friday”.

If Jesus died on a Friday, He could not be in the tomb for three nights as He arose on Sunday morning.

Then He was only in the tomb for Friday night and Saturday night.

Once again, our church leaders make us contradict the Scriptures.

Where does "Good Friday" come from?

Around AD 195, trying to gain supremacy over the other churches, Pope Victor 1 said that the Easter celebration of Calvary must not happen on the full moon as happened in the Exodus Passover but must be held on a Friday. This became known as the unscriptural “Good Friday.”

How much more do we get wrong?

Who taught us these errors? Church leaders who want to be popular.

No Scripture says a pastor is the head of a church

Do you get a feeling that the church leaders are fooling us?

“The pastor is the head of the church.”  This is an unscriptural statement.

That means that no pastor has the Scriptural right to claim to be the head of a church.

The churches are thus in the wrong hands, which explains why they are so unscriptural as regards many issues.